I recently led a one-hour classroom discussion on startups for my five-year reunion at Davidson College. This post is a summary of the notes I used to plan the session. Many of the ideas here were inspired by Paul Graham’s essays and Scott Galloway’s book The Four: The Hidden DNA of Amazon, Apple, Facebook, and Google. I’ll try to link to specific essays and excerpts when relevant.

What is a startup?

Which of the following companies are startups?

With many more examples, I don’t necessarily have a correct answer, and I think it quickly becomes clear that we all have a vague notion of what a startup is, but it’s surprisingly tricky to pin down to classify specific companies. Possible criteria include age of company, need for external investment, for-profit, privately-held, high growth, small number of employees, small revenue, novel problems, novel solutions, or non-obvious success. There’s not a consistent agreement here, and if you ask someone in Silicon Valley, New York, and Florida about which of these criteria are essential for a startup, you may get very different answers.

The point here is that startups take many shapes and sizes and there is no one “correct” recipe. As far as when a company is a startup and when it isn’t, I tend to agree with Paul Graham’s assertion that startup = growth. The defining characteristic of a startup, in my opinion and according to Paul Graham, is the goal of selling to a large market. This shapes the behavior and output of the startup in defining ways because rather than serving only a local or easily-satiable need, startups need to make something lots of people want in a way that can reach and serve all those people. The key is scale and it necessitates that startups be focused on growth. I posit that this, whether explicitly defined or not, is the viewpoint of startups in Silicon Valley culture, and a very different meaning may be understood elsewhere.

The Right Idea for a Startup

I often hear people say they are interested in entrepreneurship but they don’t have an idea. This is probably just a convenient excuse rather than the real reason, and I think it’s a mistake. If you’ve said this, hopefully this section helps encourage you to believe that if you are really committed to starting a company, having a brilliant new idea is not a prohibiting factor.

In the next section of my workshop, teams of 2-3 people created and pitched a startup idea. I gave some pointers on how to come up with ideas, but I also wanted to emphasize how having the right startup idea is often over-emphasized by many potential founders. Within 15 minutes, every group had a reasonably compelling business idea, so it’s not as difficult as people like to say. Additionally, many companies change their product and core idea more than once before they find growth.

I’ve noticed that founders who start a company without an idea can build incredibly successful businesses because, in my opinion, they take the time to critically reflect on any prospective ideas, and they aren’t too attached to a single business plan, so they are willing to pivot until they find the best product.

With that in mind, I did give some tips to help the groups more comfortable planning their startup idea. Many of these ideas are borrowed from a presentation by Dalton Caldwell and Paul Graham’s essay on startup ideas.

How to Generate the Idea

This divide is another reason why startups and startup investing are high risk and high reward. Startup success is simply difficult to predict. So don’t be dismayed when family, friends, and investors laugh at your idea. The image below is a visual representation, described by Paul Graham on account of Peter Thiel.

Do take a moment though to consider the fallacy of survivorship bias in my prior paragraphs. Google, Facebook, and AirBnB all had their own struggles to convince investors, so all bad ideas must become giant successes, right? Just remember that there are plenty of companies that started with seemingly bad ideas, and those companies failed for one reason or another, idea or not. Then, use the next list below to evaluate your own idea and convince yourself why yours is one that is actually good and isn’t as bad as it sounds. 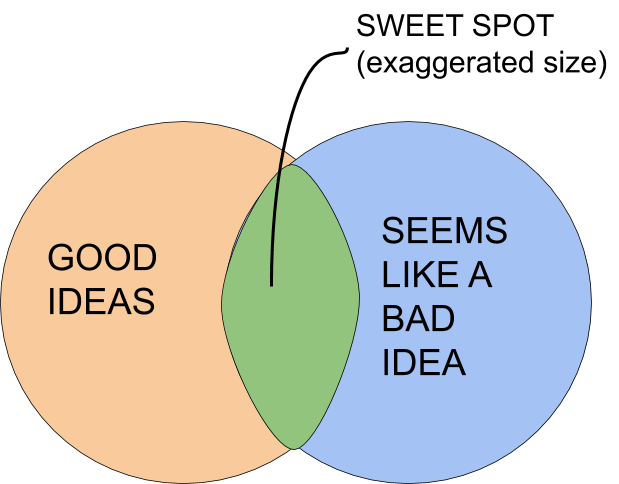 The sweet spot for startup ideas is in the small overlap between good ideas and ideas that seem bad.

How to Evaluate Ideas

Here are some very simple questions and tips for a sanity check on your startup idea. Many are borrowed from Dalton’s slides linked earlier.

At every stage of a company, it’s essential to able to describe the product clearly and concisely, whether pitching to investors or marketing to customers. If the idea is too complicated to describe in 1-2 sentences, you probably need to try harder, and if it’s still too complicated, then this is a signal of an unsuccessful idea. I wrote more about the importance of this along with examples in my post on advice for a Y Combinator interview.

To give a thorough and compelling pitch of your startup, I recommend the following format.

This is so simple that it may seem undignified, yet it’s incredibly important. Time and time again, I’ve seen startup founders try to get fancy when introducing their company, and this almost always leaves the listening investor confused. That is a bad result. If you clearly describe the above bullets, others will understand what you’re doing, and that’s the first critical step to any conversation. It’s harder than it seems, so if you’re pitching your startup, practice on a friend or a stranger and make sure they understand the company.

If you have an idea you’re passionate about, that’s probably sufficient. A useful exercise we did during Y Combinator was a back-of-the-envelope calculation to see how to reach $100 million in annual revenue. This often results in one of two reactions: (1) the founders are pleasantly surprised how feasible it is to grow big OR (2) the founders are shocked how impossible it seems to ever reach such a ridiculous number. If you’re in the second camp, it may be worth reconsidering the business plan, but mostly, it’s important to be aware. It may seem incredibly premature to make these estimates, but it’s the way many investors will judge your business. Investors don’t want a good company, they want the next unicorn, and because companies in Silicon Valley are frequently valued at 10 times revenue, investors will be looking for mental math of at least $100 million in revenue. It’s perfectly acceptable for a founder to not have this goal, and it’s one of many examples of the possible misalignment of incentives between founders and investors, but whether or not this is important to you, it’s important to be aware of this.

Lies you Will Tell Yourself

Finally, I’ve talked to many founders and potential founders, and I’ve changed my own opinions a lot during my own entrepreneurship. I often hear the same things that I believe are almost always misconceptions. The following are statements I hear which I consider false. If you find that you are telling yourself one of the following, and you probably will, then consider whether it’s really true or a convenient excuse.

I often hear founders say the following, and I think these are more likely true.

It turns out I have more to say than expected, and this is what I was able to cover in the workshop. I have many other topics I’d like to cover, so possibly I will write about them in the future. They include:

If it’s not already obvious, I highly recommend Paul Graham’s essays. They already cover many of the same topics in a way that is more clear and insightful than I could hope to achieve.